DUDE, STOP – WE ARE ON STEAM STORE!

The stars have aligned! The day has come! It’s happening! We finally did it! …oh wait, the game is still not finished. Never mind, back to work. It’s just a Steam Store page, no big deal. Pfft.

We have finally managed to sort out all of our legal issues and sign the contract with Steam! It took us a week more than we thought it would (making it a couple of months), but it was worth it! Now we’re with the big boys, we’re like real game developers, ha! This feels awesome! 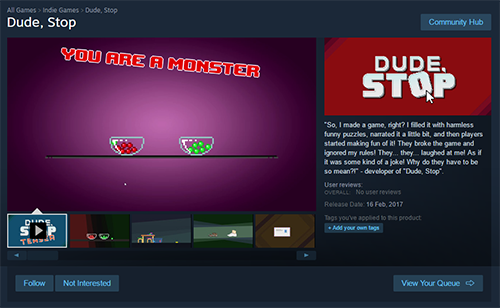 To celebrate this moment we took some time to update our logo by adding some new elements that should emphasize the spirit of the game: 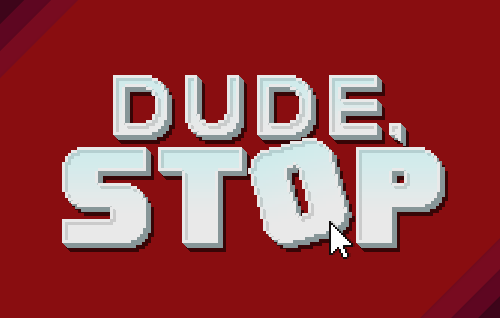 You also should totally check the new description on the Store’s page. We actually worked ten hard minutes to write it!

The screenshots might look familiar, but are actually new because they have updated graphics and background. Oh, you’re asking “where are the ACTUAL new screenshots”? Well, do you want to get spoilers? Because that’s how you get spoilers! And you don’t want that, do you? (Please answer “no” just so the joke would work? Pretty please?)

We added collectibles! Now you can collect small pieces of… stuff throughout the game, and then… other stuff happens for extra coolness! Remember – no spoilers! 😀

You won’t believe us, but we are still working on the audio and voice. Yep. After all that time. Not much to say here… still working… on the same… thing… kill us.

Oh yeah, it’s 2017!… Happy New Year, everybody! Here’s hoping you had wonderful holidays and spent the time well, because WE WERE WORKING. All those months fly by and we cannot truly believe that the game is already a year and a half in development. That’s about a year more than we planned to spend on this beast!

Anyway, we want to wish you a Happy 2017: a healthy diet, some warm socks from your grandparents, and a pile of cash to buy all the games you have wishlisted, including “Dude, Stop”! Yes, you heard us right – “Dude, Stop” is coming out in the first half of the 2017! Yeah, it’s much later than we told you before (remember those silly “first quarter of 2016” promises? Ha, how naïve we were), but believe us –time will pass very quickly. As for now, you can still play the demo for fifth or sixth time. Might be the first time this year! 😀